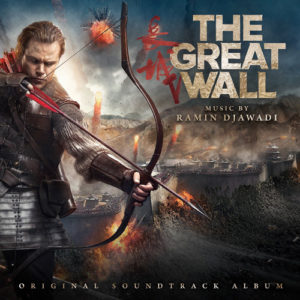 In September 2015 I went to China on vacation. While there, I visited the Great Wall of China – one of eight wonders of the world. It was one of the most wonderful experiences I have ever had. Since it was raining during my visit, I had the Wall almost to myself. Clouds and fog made it a magical experience, almost as magical as the scenes from The Great Wall, directed by Zhang Yimou. This was because of hordes of monsters that attacked the Wall, which was the last line of defense for the people of Earth. Yimou has directed some very good Chinese movies like Hero and House of Flying Daggers. The Great Wall is his attempt to make a half-English, half-Chinese movie.

Ramin Djawadi was given the task to write the music for this film. The first track, “Nameless Order,” sets the tone for the rest of the score. It’s a song that is based, according to Djawadi, on a 2000-year-old poem. It’s sung by a female choir, though since the lyrics are Chinese, I can’t tell you what they’re singing about. This theme is a pleasure to listen to and has a beautiful melody, which is integrated throughout the rest of the score, whether sung by a choir, or just instrumental.

The score has a lot of percussion and Chinese solo instruments, like flutes, that give it an Eastern feel. Especially when you have seen the movie, where the drums are played in a very choreographed fashion as you can expect from Chinese movies. Djawadi overlays the Eastern percussion with a Western symphony orchestra, giving the score a nice mix of East and West. Good examples are the tracks “The Great Wall,” “First Battle,” and “The Great Experiment.” Next to those percussion tracks, there is also room for some emotion. This can be heard in the track  “Xiao Long, General” and in the final track, “Xin Ren.” The last thing I like to mention is that in the middle of the soundtrack is a nice Chinese song that needs special mention written by Zhao Muyang and Wang Leehom. Sadly it is not on Spotify, but it can be found on Milan Records’ Youtube channel. It begins with solo vocals from the drummer, who is joined by other voices as the song progresses. I wish I could understand the lyrics they are singing.

The movie was fun and entertaining, but unfortunately, the story (though a nice idea) fell short in several ways.  What helped make it an entertaining movie for me was the music that was written for it. It fits the beautiful images on the screen perfectly. The theme song itself is beautiful and definitely worth a listen. If you want to know what the rest of the score is like give “First Battle” a listen, it is a great representation of what the rest of the score is like. This score has some great moments but to me, I am afraid that in the near future the soundtrack will become a bit repetitive. The score is definitely not Djawadi’s Game of Thrones with its many themes. But at the moment I am enjoying it. I can see myself walking on the Great Wall again, in the rain, and with this score playing on my headphones.