There is an organization in Poland that realizes film music concerts in, but also sometimes outside, Poland. I have attended one of their concerts in April 2014, way before I even started thinking about writing reports. That concert had a strong focus on music by Hans Zimmer, but we could also enjoy music from John Williams, Trevor Jones and Howard Shore. For the concert we attended in November this year, the orchestra was only performing music from Hans Zimmer. 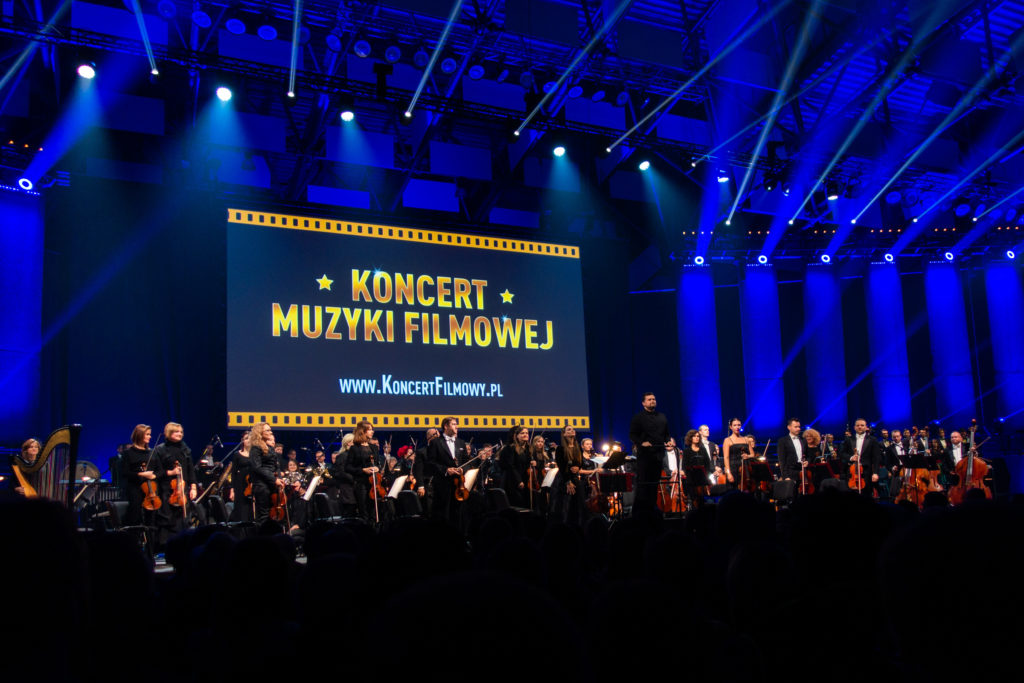 The concert was held in the brand new sports arena in the Polish city of Szczecin. It was not as big as other arenas I have been to, but it could still accommodate a couple of thousand people. The stage was quite big and stretched out to both sides to provide space for the choir, which was divided into two halves for this occasion, with the orchestra in the middle. The posters for events of this organization often show the Gladiator movie poster, so it came as no surprise that the concert started with a suite from that movie with vocalist Anna Lasota singing the beautiful parts originally sung by Lisa Gerrard and with scenes from the movie on the big screen. After the suite we could enjoy “Now We are Free” from the same movie, where we could also hear a guitar and a bass guitar present in the orchestra and Lasota singing the song. 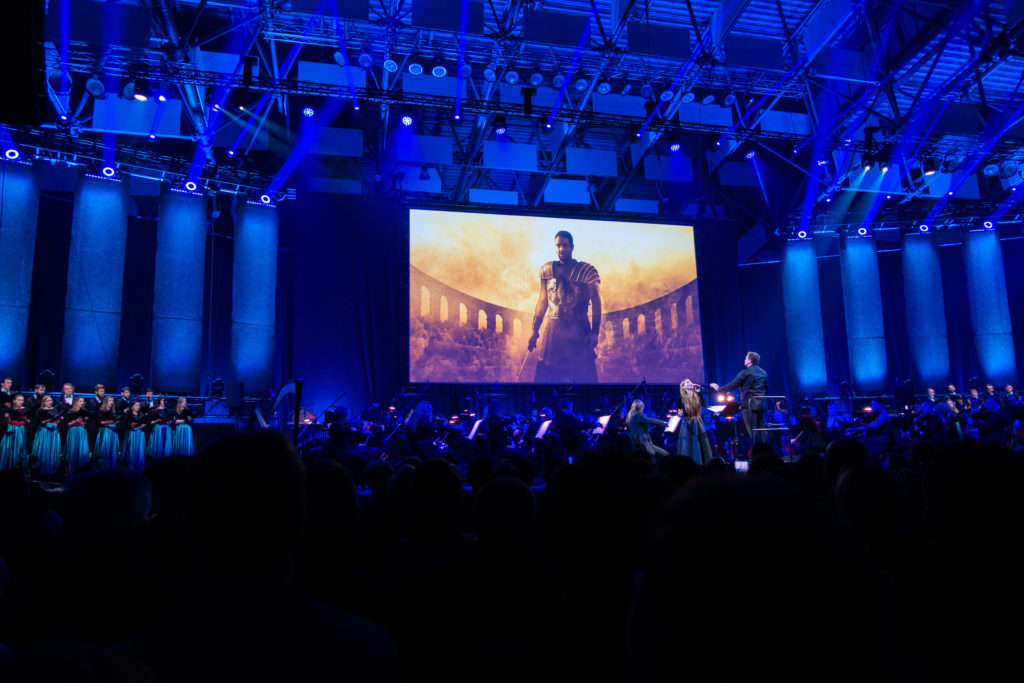 Each time the orchestra had performed two or three pieces, the host of this evening, Magda Miska-Jackowska, came on the stage to tell the audience about Hans Zimmer, her personal experiences with him and information about the pieces that were going to be played next. Since I do not speak the Polish language, I could not understand what she was saying, but I definitely appreciated the one sentence in English, where she welcomed all the people in the audience who came from other countries. The next block of music was more futuristic. During “Time” from the Inception suite, we could hear Lasota singing, but we could not see her on stage and it took us a while before we noticed her in the audience, walking towards the stage. We could also enjoy three pieces from the Batman movies that Zimmer has composed or co-composed. It started gently with the beautiful “Corynorhinus” from Batman Begins, which was followed by two suites from The Dark Knight and The Dark Knight Rises. For Man of Steel, the synthesizers were providing the sounds needed as a foundation for the low strings to build on. When the piece was over, I looked at my watch and expected Magda to announce the intermission, but instead she introduced the next block of music. It contained music from the amazing The Last Samurai, which is music that is better suited for only an orchestra without synths and guitars, but also the absolutely gorgeous “Chevaliers de Sangreal” from The Da Vinci Code, with the choir singing as well.

When Magda announced the next block of music, I gave up on the idea of an intermission and continued to enjoy the rest of the program. These next pieces were pretty new to me. I think I have heard the music from Sherlock Holmes only once and the music from Prince of Egypt was a first for me. The last piece of the block was Lion King, which enabled the choir to shine again. The following block consisted of older Hans Zimmer music, which I consider to be amazing classics. The first one was “Journey to the Line” from The Thin Red line, which was my favorite piece of the night. It had delicate and repetitive patterns, which are probably not interesting for the musicians to play, but are a pleasure to listen to as a fan of the music. The second cue was music from The Rock, which is one of my first scores and I am always happy when it is on a program. The final block contained music for us to say goodbye to the musicians on stage with music from Crimson Tide, where we could enjoy the men from the choir singing the chorale from the movie, while Pearl Harbor was played by the orchestra alone. The last piece of the evening was from Pirates of the Caribbean: On Stranger Tides with both the orchestra and choir were performing, while credits, with who made this concert possible, were shown on the big screen. 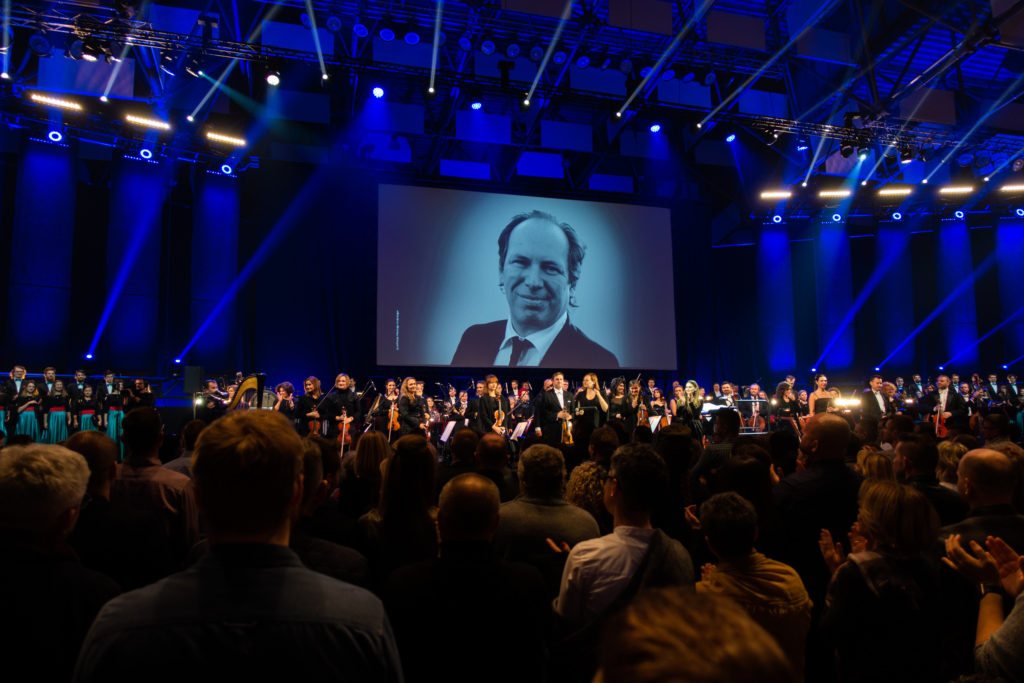 I have to admit that this was a tough concert to attend. My last concert before this one was in the amazing Royal Albert Hall in London, and a sports arena as the Netto Arena in Szczecin does not even come close to it in terms of sound quality. Because our seats were close to the stage and because the music was coming from a speaker above us, it sounded distant and unnatural. This is, of course, not the fault of the orchestra or choir. If you are going to a large concert like this in a sports arena, I recommend sitting at the back of the venue. At that distance the sound from the speakers will come from the same direction as the orchestra, making the sound more enjoyable. I am also in favor of having a small intermission during a concert. It does not only give the audience time for getting some refreshments and a quick run to the restrooms, but it also gives the musicians time to loosen up their muscles for the second half. These are just small pet peeves I have, since I have now attended quite some film music concerts in the last couple of years. The rest of the almost sold-out arena did not mind these things much at all, judging by the applause and the cheering when the credits were showing. 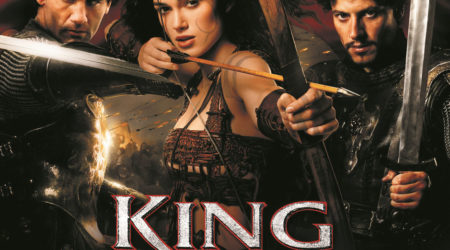