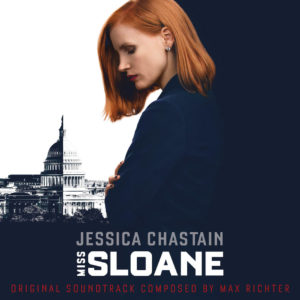 The fact that Jon Madden’s 2016 political thriller Miss Sloane is totally fictitious and has no basis at all in actual events is an indication that we are unfortunately not living in the best possible world. Set in contemporary Washington D. C., the film follows professional lobbyist Elizabeth Sloane (Jessica Chastain) in her quest to get the Heaton-Harris bill passed, which would introduce stricter background checks on gun purchases. While the political circus’s moral flexibility is shown quite drastically, Elizabeth Sloane’s eventual success makes the film a fairy tale that has yet to come true for the real-life United States.

Surely, it is quite challenging to write music for a film that is almost exclusively set in office buildings and courtrooms. Since there are neither impressive CGI visuals nor dramatic sound effects, the music’s role in generating an appropriate atmosphere is even more vital. By blending a wide range of electronic sounds with a traditional orchestra, Max Richter created a sound that is rooted in classic film music and at the same time distinctly modern. In a way, this reflects the film’s thematic conflict of personal freedom versus public safety which is also both historic and current.
In contrast to electronic chart and disco music, Richter’s electronic tracks do not have an omnipresent beat most of the time, but electronics are used to add to the acoustic pallet the orchestra provides. Even though most of the resulting sounds are quite familiar (e.g. from chart songs and advertising clips), finding the right words to describe them is awfully difficult. For example, in the track “Data Stream” there are noises that make you think of someone scratching the rim of a glass with a wet finger and the beat sounds as if made by hitting the edge of an empty steel barrel, while in “Semaphore?” it sounds like someone is beating a washboard.
Looking at Richter’s music for Miss Sloane track by track might be a little unfair. It would lead to criticism that there is too much repetition and that one track sounds like the other: much of “Wheels Within Wheels” can be heard again in “Data Stream”, “Closing In” reiterates “A Question of Adrenaline”, “Hotel for Two” and “Stalking” feature the same pizzicato string motive and so on. But this view would be too much focused on the individual tracks and neglect the bigger picture. Across the whole album there are a number of characteristic patterns which are picked up and combined in different ways. While they are not themes in the traditional sense, they still create a recognisable sound and provide a distinctive acoustic background for Miss Sloane. A piece of speculation on the side: Maybe it was not Richter’s first priority to produce an enjoyable record, as he concentrated on writing effective music for the motion pictures. Obviously, the pieces from the soundtrack are not played from beginning to end in the film, but bits and pieces of them are cut to fit the scenes. Therefore, what can be heard on the album might simply be music made from samples for further sampling.
Furthermore, this kind of ‘traditionalist’ criticism would disregard the very nature of electronic music, which often is about finding beauty in repetition and distortion of samples or musical phrases. Making music with machines has always been about more than simply emulating acoustics of existing instruments, as musicians continually experiment with new sounds and try to put them together in new, possibly unexpected ways, to create music for the future. Philosophically speaking, this art form of quotation and acoustic collage can be seen as quite emblematic of our times, where no piece of art is genuinely new but a reference to previous work. The resulting network of cross-references provides our cultural fabric and enables us to create meaning.
Nevertheless, with regard to the music for Miss Sloane it has to be admitted that most tracks on the album follow the same basic pattern: they are split in the middle with a quiet, introductory first half and an ascending second part that usually ends with some sort of climax. So all in all, it remains a question of your personal musical preferences, whether you are bored by repeated motifs or whether you can find beauty in them and are able to enjoy Richter’s music.

In consolation for purists and fans of ‘traditional’ orchestral music, there are some tracks on the album that are quite restrained on electrics and correspond to ‘classic’ standards. My personal favourite among them is “Only Believe”: After an introductory electronic sound sphere, brass and strings combine in a rousing upward movement that is as beautiful and dramatic as a winter’s sunrise in the mountains. Also the album’s final track is quite recommendable for traditionalists: The “Miss Sloane Solo” is a simple, serious and positive piano solo with accompanying strings.

All in all, I find Max Richter’s soundtrack for Miss Sloane very enjoyable. For me, it stands out because the music actually made a positive impression on me while watching the film. (Which is a rare thing to happen. Usually, I don’t really recognise much of the music in the cinema and in order to make up my mind about it, I have to listen to the soundtrack individually at home.)

Admittedly, the arrangement of the tracks in the album is not ideal and it can be challenging to actively listen to it from beginning to end. But the music fits the film very well and with its emotional strength it adds atmospheric depth to the pictures. What more could be asked of a soundtrack?