We could occasionally enjoy a concert in the Netherlands by the International Symphony Orchestra of Lviv, conducted by Raymond Janssen. They toured our country for a couple of weeks for these concerts, playing music that people recognize and is easy to listen to. I know that one of the programs is primarily focused on Carmina Burana by Carl Orff, another one is a concert focusing on Star Wars, which I have attended in Groningen, and they have The Harry Potter Symphony concert. I had tickets for the Harry Potter one, but it took a while before the event could go through. It was not only because of the pandemic, but also the war in the orchestra’s country that is still going on. Apparently, they could do their tour in December 2022, during which I attended their Harry Potter concert at the World Forum in The Hague on a Sunday afternoon.

The World Forum is quite a huge venue, and I was pleasantly surprised that the hall was packed. One of the reasons why people wanted to attend this concert was for more than just the music, because illusionist Christian Farla also participated in the show.

What intrigued me during the Star Wars concert I had attended was the use of the choir to enrich existing pieces without original choir parts, with “The Imperial March” as the most significant example. This trend continued in this Harry Potter concert, as became apparent in the first piece on the program, “Hedwig’s Theme,” to which the choir sang some lyrics jointly with the main melody.

For the rest of the concert, we could see a continuation of that concept: The orchestra performing an individual track or a suite with music from one of the Harry Potter movies, with the choir adding an extra element. In the first half we could listen to mostly the earlier movies, and in the second half the focus shifted more to the latter ones. As a result, the second part sounded more serious and darker than the first one. Luckily the darker movies have some uplifting tracks like “The Weasley Stomp.” In addition, the organizers also swapped the music from the last film The Deathly Hallows Pt. 2, with the second movie The Chamber of Secrets. This change made the balance between the light-hearted and dark emotional music feel better during the concert.

During some of the pieces, illusionist Christian Farla entered the stage with his five assistants to perform all kinds of tricks. He made items float or made his assistants disappear from boxes, cages or cabinets. His acts were also very well integrated with the orchestra’s music. Only during the piece “Dumbledore’s Farewell” did his act not really match. The music represents such a critical and emotional moment in the movie, and then to do an act about floating something in the air during it, felt out of place.

The program ended very fittingly for the season with “Harry Potter in Christmas Time,” a version of the traditional Christmas song “Carol of the Bells.” We were treated to one encore as well, which was the chaotic but fun track “The Knight Bus” again.

The best way to describe the afternoon is that I was pleasantly entertained. Someone who loves the original music from Harry Potter movies would be a bit confused by the added choir parts, but since I knew beforehand, because I had attended their Star Wars concert, I did not mind. I was surprised by the illusionist, though. It was announced beforehand that Farla would participate, but somehow I had missed that information. I had never seen an illusionist perform live before, and it was intriguing to see how he performed his ‘magic’ on this magical afternoon. I could also hear the experience of the orchestra very well. They have been doing these kinds of shows for quite a while, and their performance was well done. Hopefully, things will improve in Ukraine. I can imagine the orchestra’s performance would have been even better if their members didn’t have to worry about their loved ones back in their homeland. These people embrace film music, and they deserve better. 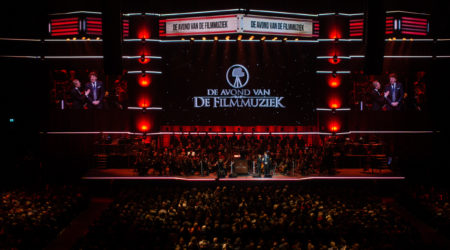