I have been very fortunate to have attended many magnificent film music concerts with a focus on a well-known composer who is also present. Some of these are with names like John Williams, Ennio Morricone, Michael Giacchino, John Powell and Hans Zimmer. One concert I knew about and wanted to experience for a long time was a celebration of Tim Burton’s animation movie The Nightmare Before Christmas, with Danny Elfman singing his own songs. Elfman performed that show for the first time ten years ago in the Royal Albert Hall in London. A decade later, he returned to the British capital to perform the concert twice in the OVO Arena, and I was present this time.

I was expecting to just see the movie, with the orchestra performing the music and Elfman and other artists singing its songs, but it became a different and better experience instead. When John Mauceri entered the stage, a long-time collaborator of Elfman, he started to conduct the music from the old Disney cartoon The Skeleton Dance first. This short sketch, about a couple of skeletons using their bones in dancing routines, fit very well in The Nightmare Before Christmas’s style. Afterwards, we still had to wait for the movie because we were treated to a musical overture of the film, accompanied by Tim Burton’s concept art on the main screen.

After the surprising prologue, it was time to start the movie. During the opening scene, the five support vocalists entered the stage to start singing the “This is Halloween” song. These singers were Angie Jaree, Baraka May and Fletcher Sheridan but also Greg Proops and Randy Crenshaw, who were the original singers in the movie. The primary purpose of the song is to introduce the main character, Jack Skellington, who is the character Elfman initially voiced in the film for the songs. When Elfman entered the stage, in his signature black-striped suit and with long orange hair, he started to sing “Jack’s Lament,” during which he was greeted with loud applause from the audience.

When I go to a concert with the main focus on a movie with live music, I can experience this film on a big screen while listening to the orchestra, but they opted for a different strategy for this concert. The big main screen showed the movie most of the time, but when the artists were performing, the film transferred to the two side screens, while the main one focused on the people on stage. What I also loved about this different format is that the movie faded to black for a short period after each song. It allowed the audience to applaud the performances before the film resumed again.

After the intermission, we were treated to an exciting performance before the second half of the movie started. This time we could enjoy the music from violinist Sandy Cameron, who performed a medley of the movie’s music in her unique style.

The second half of the movie turned out to be even better than the first one since most well-known songs are in this part. “Kidnap The Sandy Claws” was performed by Elfman and two of the other vocalists. Ken Page is a singer who was the voice of the antagonist Oogie Boogie, and he has performed most, if not all, “Oogie Boogie’s song” pieces in The Nightmare Before Christmas concerts. It was a treat to see him perform the song in his unique voice, and you could see him enjoying himself on stage very much. One of the other highlights was “Sally’s Song,” which is a short but gorgeous emotional song, and Phoebe Bridgers was invited to perform this piece in London, and she did a superb job.

When the movie was over and the end credits started to roll, I was surprised at how many people in the audience stood up to leave the venue. It was their loss because, to my surprise, Danny Elfman returned to perform one encore: his version of “Oogie Boogie’s Song.”

I was very much looking forward to this concert, and I was satisfied. I loved every minute of it. I would have had a fantastic time if the concert was a traditional movie concert with just the film showing, but with a strong focus on the performers instead made the experience so much better. It is a significant impact on my budget to spend only a weekend in London, but this concert was totally worth it. I can remove this concert from my bucket list, but I do not mind attending it again. 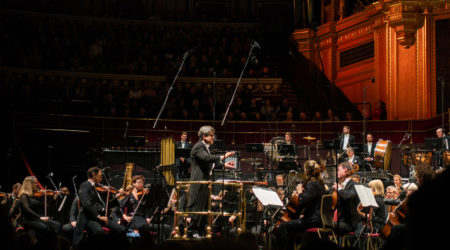 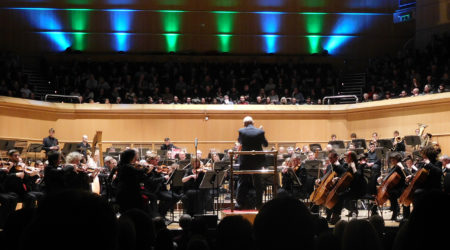