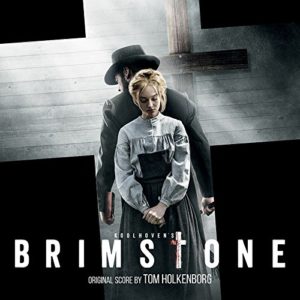 Years ago Dutch movie director Martin Koolhoven had a talk with composer Tom Holkenborg about a western he was planning to do. So when that movie, named Brimstone, came into its final stages, Koolhoven had another talk with Holkenborg. Unfortunately for Holkenborg, it was only to show him the script of the movie. To the composer’s disappointment, the director wanted Howard Shore to compose the music for his movie. For some reason, this did not work out and Holkenborg was given the job.

Brimstone is a western about a young mother and a mysterious reverend that comes to her village. The movie is very dark and very uncomfortable to watch. As the story progresses, we learn more about the woman (played by Dakota Fanning) and the reverend (played by Guy Pearce, sporting an awesome Dutch accent).  The movie uses chapters to tell the story. The chapters are presented in non-linear order, with each new chapter revealing new details. While watching, the audience is taken from one dark and uncomfortable scene to the next. It left me feeling very uneasy.

One factor that contributed to the uneasy atmosphere was Holkenborg’s musical score. Before this movie, I associated Holkenborg’s music more with his alter ego, Junkie XL: a lot of percussions and bombastic sounds like he has used with movies like Mad Max or the collaborations with Hans Zimmer on The Dark Knight Rises and Batman v Superman. Instead, the score consists mostly of strings and occasionally other instruments. The main influence for this score is “Passacaglia in C minor” by Johann Sebastian Bach. It is a piece Holkenborg’s mother liked a lot while Holkenborg was growing up.  Holkenborg used the Bach piece as an inspiration for the score of Brimstone. It does sound a bit like Passacaglia but you really have to know and listen to it closely to find any resemblance.

The main theme is, as far as I can hear, the only major theme on the score. It can be heard for the first time right at the start of the score in the track “Brimstone” and will resurface in variations throughout the whole score. The theme is best represented in the last track “Liz”.  Next to the main theme, the score contains a lot of tense lines to support the uneasiness of the movie.  “I Am Here To Punish You,” “I’m a Father,” and “For the Love of God” are great examples of such tracks that combine the tension with the theme. “Revelation” has the same combination but also adds a beautiful choir part towards the end of the track. “Rules Are Rules” has beautiful but sad melodies and really stands out from the rest of the score. “Exodus” is a nice summary for the whole score. There is the theme, a beautiful violin solo, choir, and tension. “Genesis” is an extreme sad track but definitely worth a listen. “Watching Over Me” is concluding the movie, starting with the theme and ending with piano and strings.

I think the score has some beautiful parts in it, but it was hard for me to find tracks to highlight.  The reason for this is that if a track has a beautiful melody it also contains a part of long filler lines that are not interesting for me to listen to. The score is also almost 90 minutes long.  Personally, I would have enjoyed this score more if the long filler parts were edited out.  But with that said I still think that I am very happy with what Holkenborg has written for this movie. It is nice to just hear the fingers of the musicians vibrating over their strings instead of the percussion with the heavy sounds that we are used to from Junkie XL. In an interview on Dutch television, Holkenborg told the host that he wrote a suite for the director to listen to. I am very curious about that one and would love to hear it.