During my Fimucité visit, I had the honor of conducting interviews with three fantastic composers. The first one with Daniel Pemberton is already published on this site and the third one will hopefully also be online soon. But for now, I hope you will enjoy this interview with none other than Trevor Jones. He was the main guest of the festival and has written music for some fairly significant movies like Dark Crystal, The Last of the Mohicans and Excalibur. On September 29th, 2017 we talked about how he writes his themes, where he learned his craft and how his music fits in the whole process of creating a movie.

Anton Smit: We are here at Fimucité on Tenerife, how do you like it here?

Trevor Jones: I love Tenerife. I have been coming here for years with my family after Christmas day until to about the 7th or 8th of January. They are the two weeks when the film industry does not work. We stay in the north of the island in the same place. I know the island very well and I love being here. The invitation to come and be a part of the festival was very exciting for me, a big honor and a privilege.

AS: When I listen to your music, what stands out for me are those iconic melodies, what are your influences to write those?

TJ: Everyone in the movie business are storytellers. If you are a makeup artist or an actor, they are all telling a story. Each one of them is telling the story in their own craft. A cinematographer tells it with pictures, the writer with dialogue and the actors with who these characters are. The music tells the story with emotion. It is a conspiracy of lots of creative people to entertain, to give the audience the maximum value from their imaginations and creativity and to tell the story as cleanly as possible. When I write a scene, it is usually after I have worked through the whole film and the story, then somehow it all comes together in my head. To express the general feeling, the story, the importance and the scope of the film, I want to go “Paa ta ta da..” [sings a melody]. I want to express the emotion–the intensity of the story–through the music. Music is one of those elements that can do that. It is a very special element and a part of the filmmaking process. Each element plays its own part, but the music goes from my heart to your heart. Film music bypasses the emotion. Sometimes you are not even conscious of what the music is doing in a movie. Often I say to people: “What do you think of the music in this film or that film?” and they reply with “What music?” That is a good sign because that means that they enjoy the movie. Music is an element: just one part of a lot of creative elements that come together to give you that cinematic experience. For me, that is very exciting.

AS: However, nowadays, people are listening to your music alone, without all these extra elements. What are your thoughts on that?

TJ: I am delighted that it can stand on its own, but it was inspired and created to be a part of a bigger process: a cinematic experience. That people want to listen to it separately is touching and very flattering for me. I am glad they enjoy the music on its own. I think it is about my craft to be able to write in a way that serves the movie but at the same time can serve an audience’s listening experience. Film music themes are like labels for movies. When I sing “Pa pa pa..” [sings Star Wars]. Or when I sing “Pa pa pa..” [sings the almost identical theme from King’s Row]. Those were ways of promoting the film and giving it a musical identity. You get the smaller things, the motifs that the composers write, like Jaws. When you hear it, you know it is Jaws. Music is like the wrapping on a Christmas present: it gives it an identity and a label. It makes it instantly promotable on the radio if a good tune can be heard and can be identified with a particular film project.

AS: How do you feel about your music being performed live on stage?

TJ: I am excited whenever film music is celebrated by film music festivals. It used to be the Cinderella: nobody thought film music was important when I first started out. They did not even teach it in college or university, it was not a subject. I went to the National Film School in Great-Britain to learn film scoring. But they told me in order to do that, I had to start a department myself. To learn how to score for a movie, they told me to look at the old movies and with the 22 students present, I had to write 22 film scores. You make mistakes but you learn how to do it. I had a piano, a desk, manuscript paper, and pencil. Now each composer has their own technological studio or little booth that they are working from. It is very exciting to see it move from being the Cinderella of the movie industry to now actually going to the ball and being celebrated. The composer can actually meet the people for the first time. I write in one room by myself, weeks on end, and then I go wave my arms in front of a big orchestra and that is it. Now, I meet the people that the music actually effects, who are going to the cinema and I also meet fellow composers who do the same job. It is a fantastic way to be more involved in the whole process of film music. I am very flattered and privileged for being invited to all these lovely film music festivals and to sit in the sunshine instead of cloudy London.

AS: I can totally imagine that! Thank you so much for this interview.

TJ: My pleasure and thank you for having me! 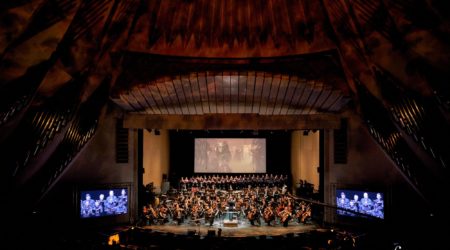 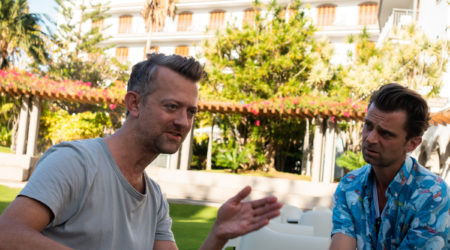