For some reason I keeping ending up in Germany for film music concerts during Easter. Two years ago I went to Brandenburg an der Havel for a Heroes and Villains concert, and last year I saw Star Wars: A New Hope with a live orchestra in Munich. This year I kept the tradition going by returning to Brandenburg for another “Hollywood an der Havel” concert, and – as a bonus – I traveled a bit farther to Berlin for “Oscars der Filmmusik.”

I have attended this concert with the same title two years ago, with the theme “Heroes and Villains.” As I have mentioned in my report of that concert, I was pleasantly surprised by the performance of the Brandenburger Symphoniker, and I was hoping for another great concert.

For each “Hollywood an der Havel” concert the organization chooses a theme and this year the theme was ‘water’. Apparently, many film music pieces can be performed using this theme. Jaws is, of course, an easy pick for the theme and after the famous two-note theme, the orchestra, conducted by Hannes Ferrand, also played the lesser known “Out to Sea & The Shark Cage Fugue,” which was a pleasant new discovery for me. For Titanic they had also chosen some interesting music. First, we could listen to “Rose,” where the solo was played by the bassoon player on a special flute and while his performance was not perfect, I really appreciated his effort. The orchestra also performed “Hard to Starboard” brilliantly, which is very hard to play timing-wise, as I have mentioned in previous reports. Next to the suite from Pirates of the Caribbean: The Curse of the Black Pearl, they also played the fantastic “The Kraken” from Pirates of the Caribbean: A Dead Man’s Chest, where I found out that it is possible to get a broad sounding pipe organ sound out of a small keyboard.

Other pieces on the program consisted mainly of music originally written for films. Some were well-known pieces, like music from The Mission, “Moon River” from Breakfast at Tiffany’s and a suite from Das Boot. The last one started with an audio track with submarine sounds that faded away cleverly while the piece went on. Several other cues were not that familiar to me. One was “Sardine Run” from Blue Planet, composed by George Fenton, which was a beautiful piece, a suite from the classic movie The Ghost and Mrs. Muir, with music by Bernard Herrmann, and they also played Philip Glass’ “Living Waters” from Anima Mundi, which was quite a bold move, since Glass is not an easy composer to listen to with his minimalist music.

The last cues that need mentioning are the classical pieces that were used in movies. The orchestra opened the concert with “Prelude” from Das Rheingold, which has a build up from simple lines to a more complex finale with more melodies and patterns. The piece was composed by Richard Wagner and used in the movie The New World. The other pieces were Paul Dukas’ “The Sorcerer’s Apprentice” used in Disney’s Fantasia and “Fantasia on a Theme by Thomas Tallis” used in Master and Commander: The Far Side of the World. These classical works that featured in movies were great additions to this concert.

Having attended a “Hollywood an der Havel” concert before, I knew what to expect. I think that the orchestra did a wonderful job performing music from – or used in – movies. Also, the return of the host Manfred Callsen was a delight. It was obvious that he is a professional in moderating a concert, and for me it was a good way to brush up on my German. He was informative, but entertaining at the same time. The last thing I would like to mention is that they also sold small booklets with all the information you need for this concert for only 50 cents. The lack of those was a small pet peeve in my report two years ago, so I was happy to see them in great numbers in the audience this year.

While I was buying the tickets for the concert in Berlin, I noticed a large map with seats. With this image in my mind I was expecting a huge production with lights and a screen at the back of the stage, but when I entered the venue, I saw that the stage was filled only with the chairs and music stands for the orchestra members. The venue was not meant for big productions, but is actually more of a large theater than a concert hall.

The program, performed by the Berliner Philharmoniker and conducted by Scott Lawton, consisted of a mix of all kinds of film music with a nod to the Academy Awards. Sometimes the music itself had won an Oscar, other times it was the movie that won the award, and lastly, there were pieces that should have won an Oscar, but didn’t. The result of this theme was a very varied program with all kinds of music from movies over a long period of time. We could listen to some old classics like “Moon River” from Breakfast at Tiffany’s for the second time this weekend, but also to Exodus, from Ernest Gold and Max Steiner’s Casablanca amongst others. From the golden age period the music went all the way to “Planetarium” from La La Land, which won the Oscar for best movie last year.

As expected we could listen to some pieces that I have heard quite frequently, like music from The Da Vinci Code, Gladiator, Jurassic Park and Jaws. There was also quite some music that I have listened to before, but have not heard live that often. For example the music from Lord of the Rings: Fellowship of the Ring, which is quite surprising since the music is so popular, an instrumental suite from Fiddler on the Roof and a brilliant version of the theme from Love Story, written by Francis Lai.

This concert did not have a dedicated host to introduce all the pieces. That job was done by Scott Lawton himself, who had a microphone under his music stand. He was able to tell interesting stories about the music and movie they were about to play, resulting in yet another entertaining, informative and musical evening.

When the concert was over, I left the venue very happy. I had witnessed another concert that was just about music written for film without any extra fluff. The orchestra did a great job, and since the venue did not need any amplification the music was just beautiful to listen to. All in all a great evening, and I would love to revisit a concert like this again in the future.

There were many similarities between both concerts and the biggest one was their simplicity: There was only an orchestra and nothing else. We could listen to the music produced by the instruments without any other distractions on stage. A speaker who gives information is a great way to add a small layer of extra entertainment while the musicians prepare for the next piece. Both concerts used popular film music cues, and in the case of the Brandenburg concert also classical pieces, to draw people to the concerts where they are introduced to all kinds of other fantastic pieces from this musical genre. Apparently, this works well in Germany, since both concerts were sold out. At the same time this makes me a bit sad, because I rarely see concerts like this in the Netherlands, and whenever they are organized, they always struggle to sell their tickets. I really wish I had a solution for this issue. At the very least I hope this report will help a bit to get more people interested in film music concerts. Even if you are not a big film music fan, they still offer an entertaining evening of beautiful music. 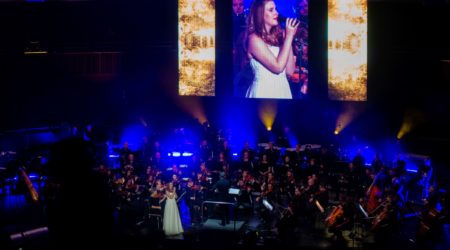 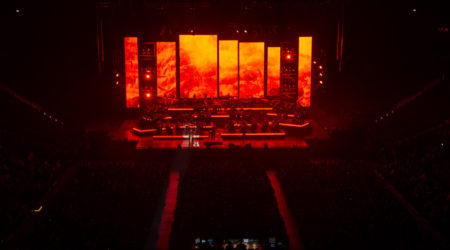