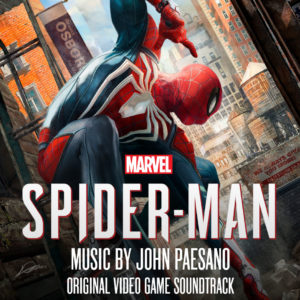 Of all the superheroes, Spider-Man is my favorite by far. When I was a child we had a handful Spider-Man comics and later, when the TV show was airing, I watched every single episode. My love for him is still present, and the Spider-Man franchise is still going strong with the game Marvel’s Spider-Man having just been released for the PlayStation platform and earning a lot of praise. Being curious about the game but not owning a PlayStation, I started looking at footage on YouTube. While watching, I noticed the great thematic music, composed by John Paesano, in the background. Paesano is quite familiar with composing for Marvel and PlayStation: He has written music for Marvel’s Netflix TV shows DareDevil and Defenders as well as for the PlayStation game Detroit: Become Human.

The album starts, as can be expected, with the main theme in the track “Spider-Man,” which is based on a simple melody pattern played emotionally by a French horn. This is then extended with other melodies, before it starts becoming more heroic with the full orchestra and choir, living up to my expectations of a hero in the Marvel universe. The track ends with the theme emotionally played on a piano. Since the pattern represents Spider-Man and the whole game is based on him, it reappears throughout the whole album and the simplicity of the pattern makes it easy to integrate it into all kinds of cues. Variations of it can be heard in tracks like “Eight Years In the Making,” “The Golden Age,” “All the King’s Men,” “City of Hope” and “City on Alert.” Overall, the music reflects what is happening on the screen while a cinematic is playing or during the gameplay, resulting in very different sounding tracks: “Inside the Numbers,” for example, sounds like futuristic background music where the main theme is laid on top with a slower pace, while in “City of Hope” you can hear the theme in its full fanfaric glory.

If you listen to the album from start to end, you can also hear a story that unfolds next to the main theme. In the first 8 tracks, the heroic version of the theme can be heard a lot. What I hear in those tracks is Spider-Man just doing his regular heroic thing and everything is going his way. In “The Man He Was” things start to change musically. Mystery can be heard, using all kinds of musical patterns with an occasional female voice. This tension and unnerving feeling continue throughout the next couple of tracks, together with action music and rapid musical patterns that go on like a machine. The best examples of these action music tracks are the fighting scenes of one of the villains, which are “The Demon He Became,” “Chasing Down The Devil“ and “Negative View,” which can be heard later on the album. “The Breakthrough” is a bit of an island in a sea of tension with a victorious sounding Spider-Man theme. “Worlds Colliding” is an emotional and sad track with a female voice and beautiful strings. “International Support” is a track where the choir has to sing lyrics for the first time together with Russian sounding melodies. “The Sinister Six” creates a mysterious atmosphere with the help of electronic music.

In the next track, “The Mastermind,” things are getting interesting because a new theme is introduced. It is more like a pattern that starts delicately and mysterious, but at the end of the track, the same pattern is performed by the full orchestra and sounds dark and evil. Just as the Spider-Man theme, it contains a musical pattern that can be heard in the rest of the score, sounding very emotional in “No Going Back,” or integrated with battle music in “Renewed Rivalries.” It should not be a surprise that this new theme represents the main villain of the game. His theme can be heard for the last time in “The Final Lesson,” where emotional violin play has the upper hand. “Responsibility” is one of my favorite tracks on the album. It contains a beautiful and sad piano melody with a choir and strings in the background for support. “Behind the Mask” is the last track on the album and contains the Spider-Man theme. What I love about it is that the theme sounds different: less heroic, more grown-up and wiser. You can hear in the music that Spider-Man has gone through a journey with ups and downs and that he has learned from it.

Overall, the music is excellent in emotionally supporting all the things happening on the screen. You can hear the heroism, the tension, the sadness, the despair, the conflict and the victory very well in the music. The two main themes, used as leitmotifs, are just fantastic in this score. Some soundtracks just click with me, and I cannot stop listening to them. This soundtrack is a great example of that. I listen to it on the train, on my bike, while walking and while I am working. When I listen to it, I just see Spider-Man web-slinging through Manhattan. I hope you will give this album a shot and enjoy it as much as I do. 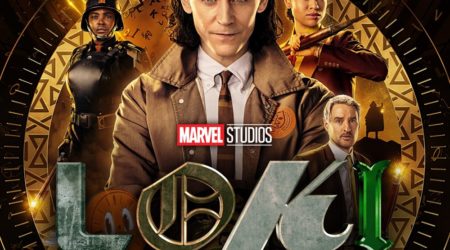