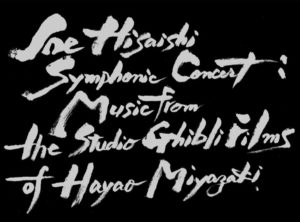 When I heard that Japanese composer Joe Hisaishi announced on Facebook that he would be returning to Europe for a concert in Paris, I was thrilled. I asked a friend if he wanted to join me and went online to buy the tickets. After half an hour of cursing at a French site that was overloaded with all the other fans who had heard the news, I finally managed to two tickets. I had no idea where we were sitting, but at least it was next to each other. Only a couple of weeks later did I hear that Joe Hisaishi would also come to Prague seven weeks before playing in Paris. That concert in Prague was a great experience and you can read all about that concert in my other report. Luckily for us, both events had a slightly different focus: the concert in Paris was all about the Studio Ghibli animations, while the concert in Prague had a bigger scope of movies. And another great addition of the Paris concert was the presence of Mai Fujisawa, the vocalist who also happens to be Hisaishi’s daughter, a children’s choir, a regular choir and another nice surprise that I will reveal later in the report.

The layout of the orchestra was familiar from other Hisaishi concerts. The first violins and violas have their usual place in the orchestra, but the cello and the double basses combination swapped places with the second violin players. When Hisaishi entered the stage, he received a standing ovation from the audience. When the noise finally settled, Hisaishi began to conduct the first piece of the evening: a selection from Nausicaa: Valley of the Wind. The start was a bit rough, I could not hear all the instruments that clearly, in a piece that I know so well.  But all was quickly forgotten when Hisaishi started to play the main theme on the piano. Also, the choir part right after was very beautiful. Loud cheers came from the audience when Mai entered the stage to sing the song that had been recorded over 30 years ago. You could still hear a bit of her childish voice in the song.

The next piece on the program is my all-time favorite: Princess Mononoke. When “Legend of Ashitaka” started playing all the expected emotional responses started to happen: goosebumps appeared and tears were flowing. . . until the percussion of the next track ripped me out of my emotional state. Unfortunately, it was the short version, but luckily for me, the percussionists were very precise in the following piece right after the transition. For the final piece of the Princess Mononoke suite, soprano Hélène Bernardy entered the stage and to my delight started to sing the Japanese version of the song.  While she was singing, goosebumps started to reappear again like they never left. Especially when the choir took her part over and Bernardy started to sing over it.

The music from Kiki’s Delivery Service was played delightfully. I still have not seen this movie, and the images on the screen, while hearing the happy tunes, made me want to change that soon. The piece also contained a beautiful violin solo that the concertmaster played very well. The Wind Rises started with a nice duet between Joe on the piano and Mathieu Sarthe-Mouréou on the mandolin. As with the previous piece, I really need to see this movie to enjoy all the well-drawn images in combination with the gorgeous music.

Next on the program was Ponyo on the Cliff by the Sea. It included ”Mother Sea” performed by the soprano. After a nice middle part done by the orchestra, and with solid chords done by the choir, the main Ponyo song started. I am not a big fan of the original since it sounds very childish to me. But I was pleasantly surprised with this English version. It was funny to see all the serious faces in the choir while singing a children’s song. Before the suite started I was not so sure if I would like it, but I was pleasantly surprised when the piece was done.

Then something very unexpected happened: Hisaishi turned around as if ready to conduct the audience. But it was not the audience he wanted the conduct, it was the percussionists that secretly installed themselves in the audience at the back of the venue. While they started to play, a symphonic band marched in playing the music of Laputa: Castle in the Sky. It was quite entertaining and enjoyable, but my musical ears did hear some timing problems. Also, trombones can be pretty loud when they are playing their parts right behind you. However, it was a nice chance for the main orchestra to get some rest and leave the stage without intermission. The choir was alone on stage while the marching band stayed in the aisle for the second part – “Carrying You”. It was a very well done interplay between the marching band and the choir. This would have been a goosebumps moment if the marching band had joined the choir on stage for better coordination between each other and all the sound coming from one direction. In the last part “The Eternal Tree of Life” the band marched out again, the music faded away in the lobby and the choir finished the piece.

For the next piece, only a couple of musicians of the orchestra returned to the stage: a bass clarinet, two clarinets, four trombones and one tuba player joined Hisaishi, who played the piano, for “Bygone Days” from the movie Porco Rosso. This mellow and jazzy performance was very cleanly executed and sounded very fresh after all the noise of the marching band filling the whole venue with sound.

When the orchestra was complete again, they started to perform a nice suite of Howl’s Moving Castle where especially the brass players, including the trumpet, which has a main role in that piece, deserve compliments for their well-executed performance. Next up, it was time for Hisaishi to play “One Summer’s Day” from Spirited Away on his own: a magical and spotless performance. Afterwards, Mai entered the stage again for “Reprise” that she also sang originally. To hear her singing it live was just a delightful experience and one that I will not forget so easily.

The last piece of the program was My Neighbour Totoro. Like with Ponyo I find the music a bit childish, but since the songs were all sung in English it was quite pleasant to listen to. Many musicians were playing little solos in “Hey Let’s Go”, standing up while they were playing their parts. I personally enjoyed the tuba player’s solo the most. After the piece was done, Hisaishi had a huge smile on his face and a never-ending ovation from the audience started.

Since the most famous music pieces from the Ghibli movies had already been performed, I was quite curious if we would get any encores. Luckily we did: The first one was pretty awesome. I recognized the piece but had no idea what movie it comes from. I even thought for a moment, that it was not may not be from a Studio Ghibli movie. Luckily, a friend who is a genuine Hisaishi expert has enlightened me that it was “Madness” from Porco Rosso.

The second encore and also the last piece of the evening was “Ashitaka and San” from Princess Mononoke, that starts with a piano solo. The images of Ashitaka and San on the screen just made my heart melt. The piece, and with that the whole concert, ended with the whole orchestra and choir working together to create a strong finale.

It was quite a privilege to see Joe Hisaishi. I have absolutely no regrets of seeing him twice within two months in different European cities. Overall, the concert was as great as expected. In Prague Hisaishi had an injury in his fingers but luckily, his hands have healed enough to play his piano perfectly again.The inclusion of the two choirs was also a very nice addition to the set-up I had experienced in Prague. The idea of the marching band was great for entertaining value as well and something I will not forget easily, but I still would have preferred them on stage instead of in the aisles for a better musical experience. Also, I should mention another nasty flaw in the performance of that night: there was a little crackle in one of the speakers. When you have Hisaishi perform a beautiful piece on the piano or the choir singing emotionally, a crackle like that is very disturbing. Once you hear it, it won’t go away. But that aside: if Joe Hisaishi should be coming over to Europe again, I will certainly buy tickets, because I still have hopes for an extended version of “Legend of Ashitaka” with a choir. Even after seeing Hisaishi three times, that will remain on my bucket list. 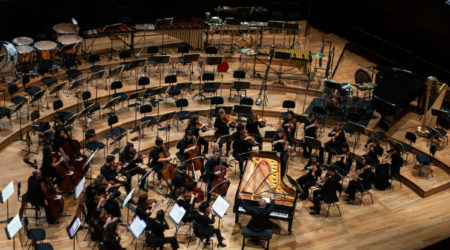 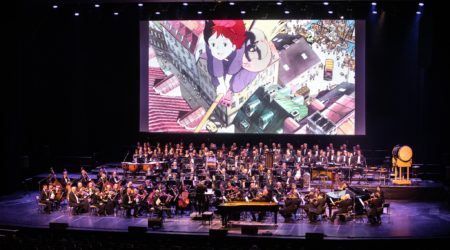