Every time you launch Netflix you are confronted with suggestions Netflix really wants you to watch. One of the suggestions that came up for me, was the movie Da 5 Bloods, about four Afro-American Vietnam War veterans, returning to Vietnam to find the remains of their lost squad leader. The movie is directed by Academy Award-winning director Spike Lee, and the music is composed by his long-time collaborator, the jazz musician and composer Terence Blanchard. I have been hearing about Blanchard from time to time, but I had never explored his music in more depth before. I thought it would be a good idea to get to know Blanchard’s music a bit better by watching this movie and listening to its music.

I always listen to the soundtrack first, and after listening to this album I already came to the conclusion that this score is quite unique. The reason is the number of themes and how they are used. There are two themes that can be identified. The first is the one which is meant for ‘Da Bloods,’ the name the veterans have given themselves. It can be heard in full glory in “What This Mission’s About.” It is a beautiful piece in which sections of the orchestra are finishing each other’s melodic sentences. To give the music a military feel it has a stronger focus on the brass instruments, and there is, of course, a snare drum in the background. It sounds heroic, but you can hear some sadness in it as well, perfectly suited for veterans who are scarred by war. The other theme can be heard in the second track called “Otis and Tien Have Dinner,” with a sad melody on an ethnic flute. I am not entirely sure what this theme exactly represents, but it can be heard a lot when other people than the Bloods, mostly their family members, are the main focus of a scene. For this reason I will call it the family theme, even though it can also be heard in scenes without any family members.

The whole one hour score is filled with these two themes and there is not much music to be heard that is not connected to one of the two themes in some way. Most of the implementation of the music is very well done. Sometimes a theme sounds more heroic and sometimes a bit more emotional. A clever trick of Blanchard’s was to make the family theme use the same instrumentation as the Bloods theme, like in “Rice Paddies,” to make both themes flow into each other perfectly. I do have to mention that especially the ethnic flute part of the family theme is used a lot in the same way, without many variations, resulting in me getting tired of hearing it over and over again.

Most of my reviews have a strong focus on the music of the album, but for this soundtrack, I need to talk about the implementation of the music in the movie. In the first part of the movie we can listen to most of the music you hear on this album, with many uses of the two themes, but there were certainly some moments where I was confused by the use of the music. I already stated that I cannot pinpoint exactly what the family theme represents, but this is not the only problem that I had with the implementation of the score.

Attention: the next paragraph contains minor spoilers for the movie, but still avoids major plot points.

In the movie, the Bloods are not only looking for the remains of their leader, they are also looking for a treasure of gold bars they hved found during the war, which they then bury in the jungle. In addition, the danger of landmines gets introduced in one of the scenes. In a specific scene they are excitedly digging up the bars with the music from “Finding the Gold” playing in the background. In the music there is no sign of any danger, making me extremely uncomfortable while watching the scene: will they dig up gold or a mine? Maybe it is a brilliant use of music to hide that danger, but  it did not work for me and made me extremely anxious, to the point where I had to log out of Netflix and go do something else, only coming back later to finish watching the film. I am not sure if this approach for the music was intentional, but making me stop watching a movie for a bit  is, I assume, not what the makers had intended.

What happens after the “Finding the Gold” scene is the second problem I have with the movie, and that is a lack of music. After this scene, which is around halfway in, the music stops and there is no original music for more than 22 minutes and yet during this time, many things are happening. There was grief, sadness, surprise, death and love, while absolutely no music was playing in the background, except for an excerpt from a Marvin Gaye song. In my opinion, there are two valid reasons for not using music in a scene. The first reason is a simple one: the scene does not need it. This is often the case when acting, visuals and dialog are working so well together that music would get in the way, and for me, the 22 minute period does not have that qualification. The second reason is that using no music for a while can increase the impact when the music resurfaces for a scene, but the music comes back again when someone has to pee, which in my book is not very impactful. The lack of music remains until the end of the movie, even though some scenes could definitely use some music.

It is very difficult to form a well-defined opinion of this soundtrack. There are some gorgeous pieces on the album, which are definitely worth listening to. I did suffer from a bit of fatigue for the family theme, which in my honest opinion is overused without enough variation. I also do not get how the music has been integrated with the film. Maybe the movie is a masterpiece, and people will praise how brilliantly the music is used, but I do not see it. However, it is quite interesting for me that this superb orchestral music on its own, has no hints of jazz whatsoever, because Blanchard is still active as a jazz musician. I am quite intrigued by him as a composer, and by what kind of scores he has written in the past, and will compose in the future. 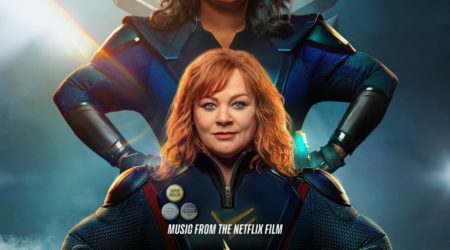