Symphonic Chronicles of a Legendary Era

On Friday September 29th, it was time for my first concert of this year’s Fimucité in the most beautiful concert hall that I know: Auditorio de Tenerife with its stunning architecture. The program consisted of all kinds of music from fantasy based media, with the main focus on swords and magic. But before we could go into the world of magic and wonder we were first treated to music from the winner of the best Spanish film score and best Spanish composer awards: Pascal Gaigne. The first piece was from The Lighthouse of the Whales, which featured a saxophone solo performed by friend-of-the-festival Kiki Perdomo on soprano sax. He was also accompanied by an accordion player during the piece. The next piece from Gaigne was El Olivo. It contained some accordion music again, but also a fantastic and emotional cello solo.

After these two gorgeous melodic pieces it was time to start the official program with a bang with “Main Title” from Beowulf. In my opinion Alan Silvestri is very good at writing short and powerful themes. A powerful track like this requires a powerful conductor and with Eímear Noone, dressed in her beautiful costume, the concert got just what it needed. With her at the helm, the Beowulf piece had all the power it needed, with the whole choir singing, the brass blasting the melody, and the electric guitar supporting. The abrupt stop at the end of this piece left the audience in awe. The next piece was the main theme from Conan the Destroyer, which is also very vigorous with mainly the strong horns giving it the power that a barbarian like Conan needs. After a word of welcome by Noone, we heard a number of great pieces. The Sword and the Sorcerer started with another strong performance from the horns. Afterwards it was time for music from the game Baldur’s Gate: Dark Alliance 2, with an important role for the choir, who sang some creepy lyrics, and a forceful ending where orchestra and choir came together. The Beastmaster started with the famous theme that I know so well.

I was looking forward to next piece: King Arthur: Legend of the Sword by Daniel Pemberton. As you may have read, I really adore this score. The piece the orchestra played was “King Arthur: Legend of the Sword.” The original score has not been written for an orchestra and it is very dependent on the mix done in the studio, but the orchestra tried their best. As the audience applauded I regretted that the orchestra hadn’t performed “The Born King” instead, as it is much more suited to a live performance. Apparently the orchestra agreed, because, to my amazement, after a short intermezzo they actually started playing it. The main solo was done by a viola and that sounded fantastic. The whole piece gave me goosebumps. Season of the Witch by Atli Örvarsson was next on the program. It had some awesome choir sections, with some powerful support from the orchestra. We also got to hear music from Ennio Morricone in the form of a suite from Red Sonja, which just belongs in a concert like this. I know this suite very well, and I was quite happy that this piece was well executed.

Besides conducting, Eímear Noone is also a composer. We got to hear some of her music from World of Warcraft: Warlords of Draenor. For this piece, the orchestra and choir were joined by 180 musicians from all over the world who had recorded their parts individually, and who were projected onto the big screen screen behind the orchestra during the piece. The result was a truly massive sound. One of the virtual performers was Mexican singer Malukah, who has a beautiful and enchanting voice. While the piece was playing we could see all the other musicians play and sing on the big screen behind the orchestra, resulting in a massive sound for this piece. The last piece of the first half was a suite of music from Highlander, which included the two songs “Princes of the Universe” and “Who Wants to Live Forever” sung by Cristina Ramos, a returning guest of the festival. She can sang everything from rock to opera, and these two Queen songs were not a problem for her. Each song was followed some of Michael Kamen’s compositions for the film. The long suite was concluded by Ramos, who sung an alternative version of “Princes of the Universe.” After more than two hours the first half of the program came to an end.

The second half started with music from the main guest of the evening: Trevor Jones. The first piece of his music was a suite from The Dark Crystal. The music itself is so melodic and gorgeous, it was not hard for me to enjoy this piece. I especially loved the female choir, and it was fantastic to hear more from this movie than just the famous theme. For the next piece, a suite from Excalibur, additional musicians came on stage playing medieval era instruments. There were three guitar-like instruments, a flute player, and a serpent player. The music they played together with the orchestra and choir was very interesting and a pleasure to listen to. The last piece composed by Trevor Jones that fit this concert’s theme very well was of course music from Merlin. For this piece Jones himself came on stage to conduct. The music was just gorgeous, with another compliment for the horns screaming the counter melody. With this piece, the Trevor Jones part of this concert was done, but not before he received a well deserved Fimucité award, accompanied by a standing ovation.

When Eímear Noone returned on stage, she started with an amiable suite from Willow, composed by the late James Horner. Especially the female choir at the end was a pleasure to hear. The last item on the program was a suite from Conan the Barbarian. We had already heard music from the sequel, but now it was time for the most famous of the Conan series and the suite was almost 40 minutes long, and included “Prologue/Anvil of Crom,” “The Orgy” and many more. I had a lot of respect for the musicians on stage for playing this piece, after having already played for about three hours. Of course we could not leave the auditorium without an encore. As we started the program with Beowulf, we also ended it with the song “A Hero Comes Home” from the same movie, sung by Cristina Ramos.

With that last piece a long night came to an end. I really liked this concert. Swords and magic apparently results in a lot of very forceful but also melodic musical pieces. There were quite a few pieces that I know very well, but that I never had seen performed live. But there was also a lot of music that I had never heard before, making this concert very refreshing for me. It was wonderful to see Cristina Ramos return, but it was another woman who stole the show: Eímear Noone was just a perfect match for this concert. The music that was played was just perfect for her. She had the orchestra and choir perfectly in check. I also loved how she addressed the audience to make them feel at home. Lastly her costume just fit perfectly with the theme of this concert. If I had one complaint about the concert it might be that it was a bit too long. I enjoyed almost all the pieces very much. However, some suites were a bit unnecessary. If, for example, some pieces of the Highlander and the Conan the Barbarian had been  skipped, it would have been perfect. That is my personal preference, I can imagine that four hours of awesome film music is not enough for a lot of people. I can agree with that. If you like sun, sea, and a lot of interesting and refreshing film music: Fimucité is the place to be. 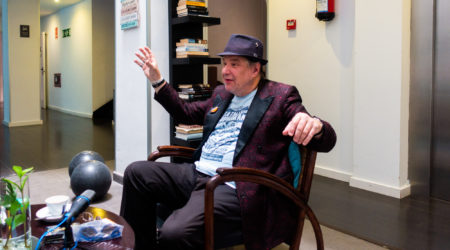